skip to main | skip to sidebar

Thanks to Shia LaBeouf (btw, how do you say his last name?), Transformers the movie made it to the top rung of my list. I noticed how cute he was in Constantine and he's even cuter now. Way cuter! Almost sexy even. 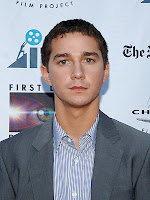 Shia made Sam Witwicky's character pop out. He was funny, smart, and totally geeky. He even got the girl in the end, which made him doubly sexy. I really loved the part where he took Mikaella (Megan Fox) home and Bumblebee helped him out by playing "relevant" songs on the radio. Now which stupid girl (or guy) wouldn't fall for that!


The rest of the movie was really fast-paced. Very typical of Michael Bay. If it wasn't for the robots I would have thought it was Armageddon and Pearl Harbor all over again. But the human characters in Transformers weren't as fully developed as those in the other two movies. For example, you could have edited out Josh Duhamel's character (another certified hottie) and the universe wouldn't have noticed.

All things considered, Transformers was a fun movie to watch. Definitely worth my time and money.

Ratings:
A+ - for Shia LaBeouf
A - for Josh Duhamel (hey, don't argue, this is a pink site after all)
A - for special effects
B - for fight sequences
D - for John Voight (not his best portrayal, sad to say. but i do love his acting)
Posted by the duke of pink at 9:02 AM 1 comment:

The Duke of Pink Presents...

Movies are my passion...

They inspire me to go on when life pushes me around too much. They teach me about life when reality fails to do so. They entertain me to uncontrollable laughter even when friends can't seem to get me to smile.

They've been my companions all my life and I love them with all my heart...